To work on PostGIS and Google Maps of course you need to learn them. This series is not a complete tutorial. To study PostGIS, the definite reference is PostGIS in Action by Regina O. Obe and Leo S. Hsu. Currently the second edition is in MEAP state and you can buy the ebook at manning website. To study Google maps, the documentation at google website is already awesome, but if you prefer a book form, the book Google Maps JavaScript API Cookbook by Alper Dincer and Balkan Uraz is a good choice, which you can buy the kindle version at amazon

In the project to integrate PostGIS with Rails, I utilized some rubygems from RGeo. The original author of those rubygems, Daniel Azuma, has created a series of articles on his website, which is very helpful. Actually this series has been inspired from his works.

In this first blog I’ll describe how to create a rails project and how to create migrations to import GIS data from shape files to our database.

To work on PostGIS of course you need to install it first. If you work on a Mac OS environment like me, using the PostgreSQL App is the easiest way. This package already includes PostGIS 2.1, so you just need to enable it, which we will introduce later.

And since we use the RGeo and some of its addons, you need to install GEOS and Proj, which RGeo depends on. For Mac users the easiest way is to install the frameworks here

Now let’s create a rails application and use PostgreSQL database (I use Rails 4.1).

Here my application name is schoolpro. Now open the Gemfile and add the activerecord-postgis-adapter gem.

And then in the database.yml, let’s change the adapter from postgresql to postgis

After the database is created, we need to enable the PostGIS extension by running following command

Get the shape files

In this application I need to import some data from shape files to the database. The shapefile is a flat file format for geospatial data originally developed by ESRI for storing sets of geographic features. It supports certain vector shapes— points, lines, and polygons— along with associated attributes. Although shapefile began as a proprietary format, the format specification is readily available, and it is now a de facto standard for large datasets. A shapefile actually consists of three (and sometimes more) related files, each with the same base filename but different extensions. The main file has the extension “.shp” and contains the geometric data itself in a binary format. An auxiliary “.shx” file provides a simple flat index allowing random access into the shapefile. A second auxiliary “.dbf” file provides the attribute data in dBASE format. All shapefiles should have those three core files, although some shapefiles may include additional files containing coordinate system, spatial index, or other related information.

The shape files I got is from gdam, which is a spatial database of the locations of the world’s administration areas. What I need is the shape files of Gabon. Just go to the download page, select Gabon and File format as Shapefile and download it. The downloaded is a zip file, unzip it you will get 3 sets of shapefiles:

Let’s create a folder shpfiles under #{Rails.root}/db and copy all these files there. These files will be used in our migrations.

My goal is to import the country polygon data from a shape file into the database in rails migrations. Now let’s import the countries shapefile. Firstly we need to create a Country model. So let’s create a model Country and add following content in the migration file,

Here we specified 3 attributes, name is country name, the iso_code is 3 letter code, for Gabon it’s GAB. The t.multi_polygon is to create a multipolygon geometry column named geom, which represents that this column can store multipolygon type in PostGIS. And we set the SRID to 4326, which is most common in shape files. Although when Google maps displays its maps, it uses SRID 3857 however when draw vectors on it it still expects the vector data to be SRID to 4326. For a more explanation of SRID, consult Daniel’s article

Now let’s import the data from the shape file into our new created countries table. We will use the shp2pgsql tool, which is already included in Postgres App. I assume that you already add the bin path into your PATH environment variable, if not, you can add them in your ~/.bash_profile

Now you can open a new terminal and run shp2pgsql to check its usage,

Now let’s create another migration to import the shapefile,

And in the migration file we have following contents,

In the up method of the migration, we first run the shp2pgsql in shell command by using Backticks(`) (check this nice blog). The output of shp2pgsql is the SQL scripts and it will be returned from the result of the shell command, and then we store it in variable from_shp_sql. We pass following parameters to the shp2pgsql:

And then at last we pass the path of the shape file and name the generated table name as countries_ref.

And then we run this SQL in a transation to create the countries_ref table and import the data. And then run the following SQL to copy the data from table countries_ref to countries.

In the down method, we just delete all data in the countries table.

GeoJSON is a format for encoding a variety of geographic data structures. Google maps already has native support for it. In this blog let’s create a static geojson file and render it in google map. In later blogs we will generate geojson format from database directly.

RGeo has a nice addon rgeo-geojson which provides GeoJSON encoding and decoding services. Let’s add it in Gemfile:

After bundle install, we can open the rails console (I have installed pry-rails to use pry instead of irb),

Firstly we get the gabon model by calling Country.first since there is only one row in countries table. For rgeo-geojson, it uses a factory to generate the feature, so we get a factory and then calls the feature method and passes gabon.geom. This geom property is a RGeo geometry instance, and it’s wrapped in feature. Then we call the RGeo::GeoJson.encode feature to encode it to a hash object, then at last we write the content of this hash to a file named gabon.json.

Now let’s move this gabon.json to the public folder so the browser can access it directly.

When we start the server and access http://localhost:3000/gabon.json we should be able to see the content of this file in browser.

Now let’s render this GeoJSON file on google maps. I have created a MapsController for that, and in the view it will create a google.maps.Map instance and render it. I won’t explain all and you can check the source code in app/views/maps/index.html.erb. (Yeah I know it’s very bad behavior to embed javascript in erb files directly, let’s refactor it later.)

The most important part is to call *map.data.loadGeoJson to load GeoJSON data,

Now when we access http://localhost:3000/maps we can see that the the gabon area is filled with black color, as following figure, 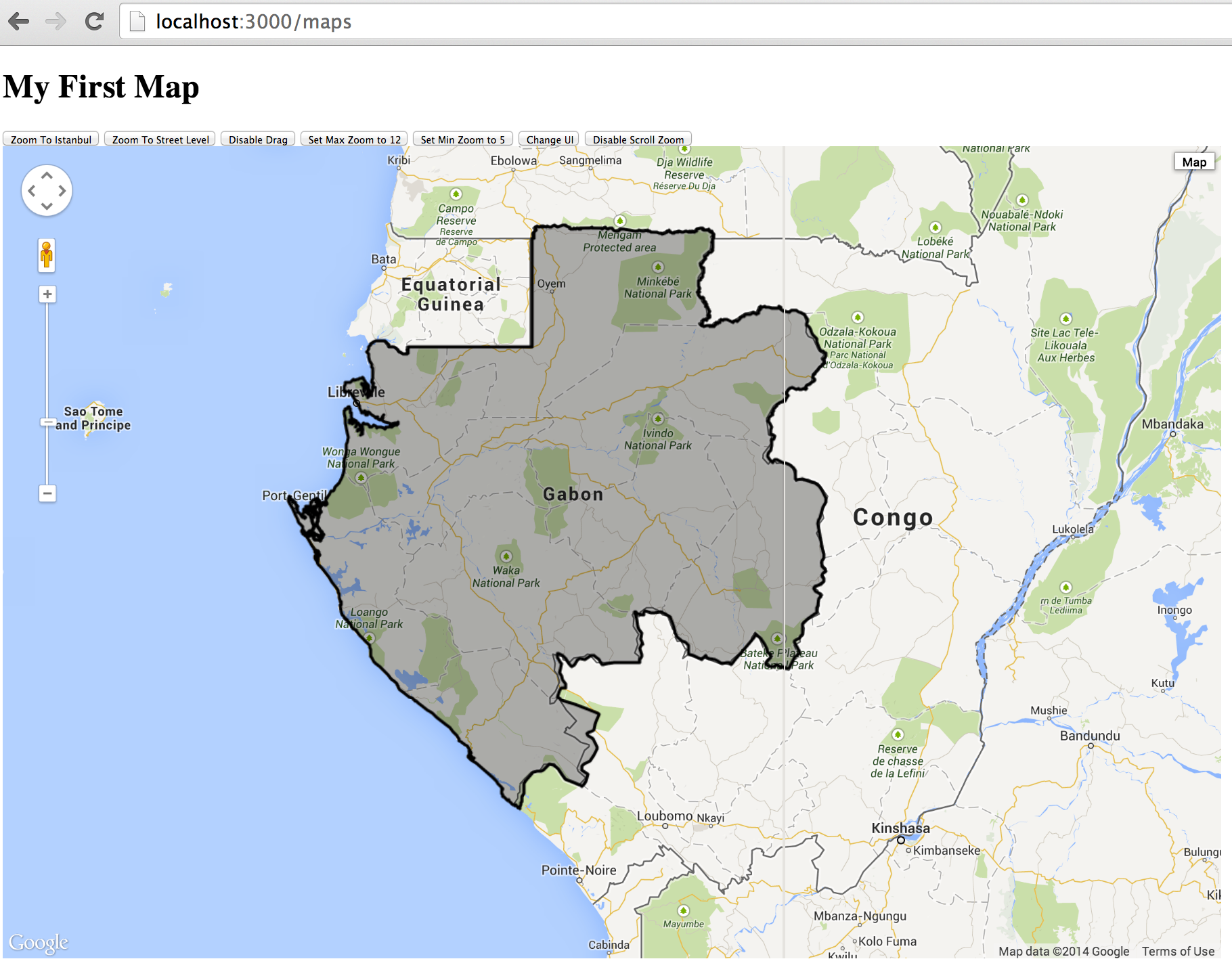 In this part we load the GeoJSON in a static file. In next part we will see how to generate the GeoJSON dynamically.