In this part we will continue our exploration of how Rails finds your templates. If you need a refresh, here is Part1, Part 2 and Part 3.

From the class name of PathSet we can get an idea that this class is to manage a set of pathes, where the templates are stored. Let’s have a look at the definition of this class.

In LookupContext class, we can see how the ActionView::PathSet instance is created.

So how this view_paths= method is called? It’s in ActionView::LookupContext#initialize method.

So how the view path is initialized? Actually it’s in Rails::Engine class.

a initializer defines a code block which will be called during application startup. So when load :action_controller it will call prepend_view_path and the view_paths contains only one element, which is the app/views folder in your rails application. 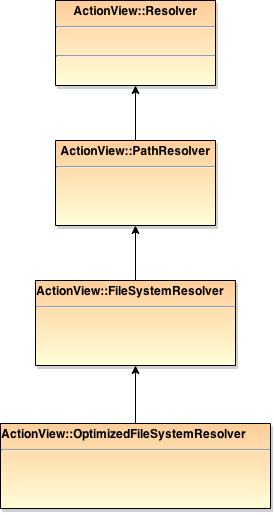 Now understand how ActionView::PathSet is initialized, and we also know that in find method it actually delegates to the resolver. So let’s see how the resolver implements the method.

The Resolver is to resolve a template when passing the details. The class relationship is as the above diagram,

The base class ActionView::Resolver provides some common functionalities such as caching for all sub-class resolvers. However here I will focus on ActionView::PathResolver, which implements the logic how to find a template in a path.

For this query, in find_template_paths it will call Dir[query], which is actually an alias to glob which is to expand the query. For example, for the above query, {p, q} matchs either p, or q. So for example for {.en,} it could either match .en or an empty string. So if we define a template articles/index.html.haml, it will match the query. For more information, consult Ruby doc.

So for each matched template, in query method it will create a Template to wrap the template file.

So in summary here we can see that the flow for Rails to find a template is as following,